Beautiful natural surroundings, hidden and rugged coves, a sea so clean you can see shellfish moving on its bottom, and beaches full of unforgettable sea adventures.

Selce is a charming, small-town on the Crikvenica Riviera in Croatia. The town itself is full of picturesque stone buildings, with narrow winding streets leading to the center and a beautiful harbor surrounded by restaurants and cafes overlooking the sea. Selce is located near many amazing natural bays and beaches that are famous in Croatia. The town has a long tradition of fishing, which got replaced by tourism. In July and August Selce hosts a beach music festival attracting many visitors from all over the world.

The town of Selce with 2,500 inhabitants is located about 34 kilometers from Rijeka and together with Jadranovo, Dramalj and Crikvenica it forms the famous Crikvenica Riviera. The history of Selce as a tourism destination dates back to 1894, when the first sea-side resort opened and the first villas and guesthouses were built. Even today you can enjoy a touch of nostalgic charm in this vacation paradise, which has fortunately managed to preserve this tourist pearl. The highlight of Selce are the numerous fantastic beaches that make this seaside resort so popular.

Selce has been named the best-tended tourist location in Kvarner four times, and has also received the ‘Blue Flower’ award for the best-tended place in the Adriatic. Our Selce is a small, modest town, once home to fishermen and stonemasons, and today an attractive location for an unforgettable holiday.

The beaches in Selce are fantastic. Splash around and snorkel the nice pebble bay, or have a relaxing swim at one of the pretty concrete beaches. You can also stretch out on a sandy beach and enjoy a guilt-free tropical drink. There are many beautiful beaches to choose from, so you have the pleasure of finding your true favorite!

The Plaza Rokan is the most popular beach in Selce because it offers white sands, gentle turquoise sea waters and a touch of soft Mediterranean atmosphere all year round. The beach itself is quite shallow and ideal for children, who can play delightfully in the sea and build sandcastles on the beach. There are some volleyball courts and a playground for smaller children besides the sandy beach, and you’ll find several bars and restaurants offering delicacies of Adriatic cuisine.

From the beach Plaza Selce is a wonderful view of the sea and coast, the shore is characterized by fine pebble and stone beaches, with quiet places for sunbathing. The beach has several water sports activities available, including snorkeling. The area of the beach is one of the best diving areas in Croatia due to its crystal clear sea and many kinds of fish.

The concrete beach in the south of Selce is very nice. You can rent umbrellas, beds and a bar by the sea. The beach is popular with all generations and people who love peace, quiet and pure nature.

The Karlovac Beach is the jewel of Selce. This breathtakingly beautiful pebble bay is located in the north of the resort and scores with an absolute picture book panorama. Particularly beautiful is the bright pebble, which together with the turquoise sea and the Mediterranean green trees conjures up a stunning atmosphere.

The sandy beach of Poli Mora is one of the most popular spots in Selce and certainly worth visiting. You can enjoy a golden sandy beach, which slopes gently into the sea and offers optimal conditions for children but also for non-swimmers. Moreover, action is provided, because right nearby is a playground, there is a water bouncy castle and also a water slide.

During your stay in Selce, we have summarized the best activities for you and highlights of the area at a glance:

Trip to Rijeka, only 35 kilometers away. The beautiful port metropolis delights with countless historical attractions, many museums and a beautiful old town.

The coastal town of Novi Vinodolski is also worth a visit, with its charming old town and beautiful coastline. A trip to Senj with the imposing fortress Nehaj from the 16th century is also recommended.

You should not miss a little road trip through the hinterland of Selce. The magnificent viewpoints “Eyes of Vinodol” offer probably the most spectacular view of the Riviera.

Numerous boat tours are also offered from Selce. Most excursions go to Krk Island and  Rab Island, which are just nearby. 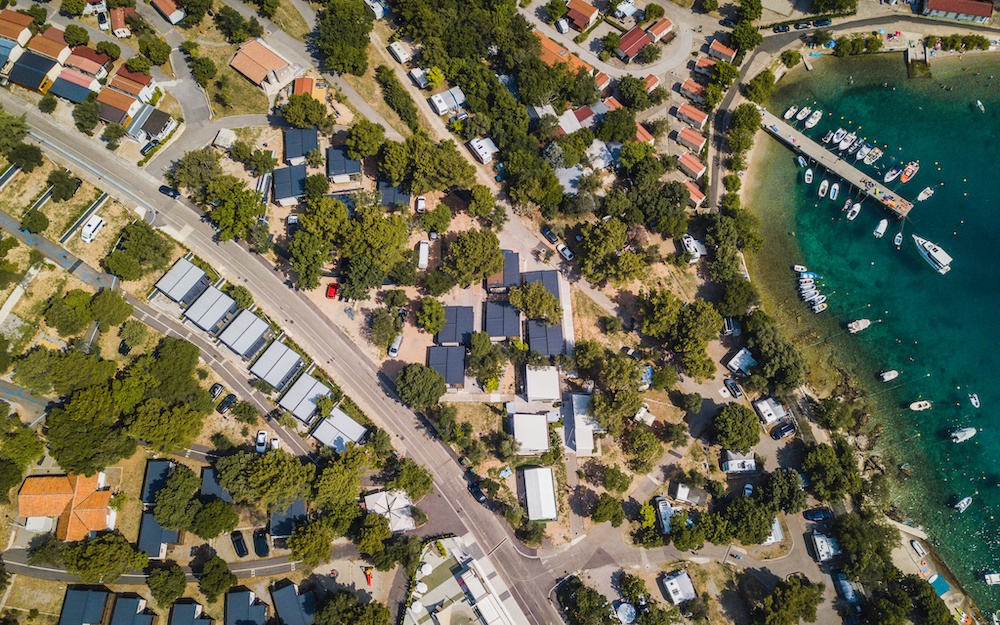